Test Pit 6 was located on the north side of Moorhills Road. Archaeological finds in the area include an assemblage of Roman pottery discovered c.800m east. Approximately 500m southeast a road widening scheme in 1954 threatened a low mound, believed to be a burial mound or meeting place.

This property is some distance from the medieval core of the village, so we weren’t expecting to find Saxon or Medieval finds, but perhaps evidence of prehistoric or Roman activity.

A thin topsoil overlay the natural. 6 modern pottery sherds were the only discovery and these did not predate the current property.

As you can see from the pics, rain stopped play for a while, but the gazebos did the job.

A huge thank you to all our volunteers and of course Phil and Valerie for allowing us to dig a hole in their garden. 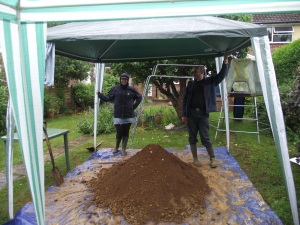 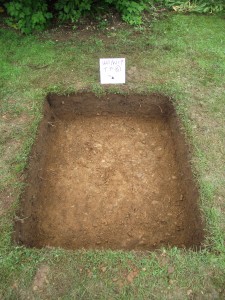