Test Pits 23 & 24 were located just west of the High Street, in the rear of a 17th-18th century public house, The Queens Head. The test pits were located in the historic core of the village.

We believe the High Street was a routeway in the medieval period and the Saxon and Norman village would of originated close to the church and historic core so the possibility of finding Saxon and Medieval finds was quite high.

We had the usual finds from the topsoil and subsoil of both test pits including china, clay pipe stems, tiles, glass, nails and bottle stops. We also found a ring from a “horse bit”.

Topsoil (087) overlay subsoil (088) that in turn overlay the natural clay and gravel.

A small assemblage of Saxo-Norman and medieval pottery was retrieved from the topsoil and subsoil. The assemblage suggests the site was on the edge of Saxo-Norman settlement activity and was then inhabited in the medieval period from AD1100 when perhaps the village street system was formally laid out.

Topsoil (090) overlay subsoil (091) that in turn overlay the natural clay and gravel.

The second test pit excavated in the grounds of the Queens Head pub retrieved a much larger assemblage of Saxo-Norman and Medieval pottery than that in TP 23.

The single sherd of early-middle Saxon pottery and the assemblage of Saxo-Norman pottery suggest the site has been lived upon since the middle Saxon period and throughout the Saxo-Norman and high medieval periods.

The gully may have once formed a boundary between properties that fell out of use in the early Medieval period.

A huge thank you to all our volunteers, our members from LBDAHS, our pottery specialist Paul Blinkhorn and Denise for allowing us to dig two holes in the pub garden and for laying on a lovely lunch. 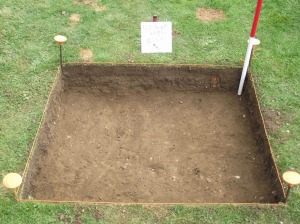 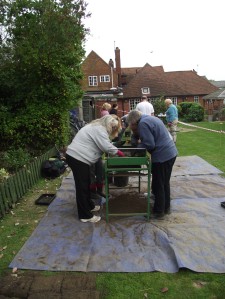 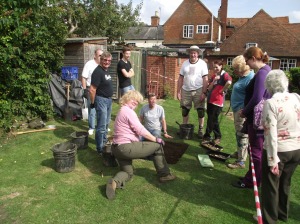 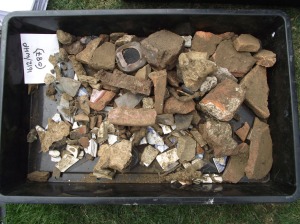