The oldest part of the church is 10th century, but it may have older origins. The Saxon and Norman village would of originated close to the church so the possibility of finding Saxon and Medieval finds was quite high. An excavation just southeast of the church in the 1990′s identified a ditch thought to be the 11th century church boundary. This test pit was excavated to see where this boundary ditch runs.

A topsoil layer containing Victorian and post-medieval pottery, glass, clay pipes and nails overlay a very deep (0.75m) mixed deposit. The mixed deposit contained a large assemblage of medieval pottery dating to 1050-1350 and late medieval pottery dating to 1350-1500. We also found animal bones and what we thought might be a human tooth, my colleague Carina who popped by Saturday informed us that it was a pigs tooth (shes an osteo-archaeologist: human bone specialist). We had to come back Sunday to finish the test pit off but we eventually got down to the natural, and no graves!! However, the large amount of the mixed deposit which sat directly over the natural, coupled with the lack of any subsoil suggests the ground has been dug and moved around a lot over the years. This suggests that this test pit was located inside the original cemetery grounds and therefore inside the boundary ditch we were searching for.

The assemblage of pot suggested that there has been continuous habitation within the vicinity of TP16 since the 11th century, with a peak of activity between 1100 and 1350.  The later medieval pottery assemblage may relate to the additions that were made to All Saints Church at this time.

A huge thank you to all our volunteers, Paul from LBDAHS, Paul Blinkhorn for his pottery analysis and of course Heather for allowing us to dig a hole in her garden. 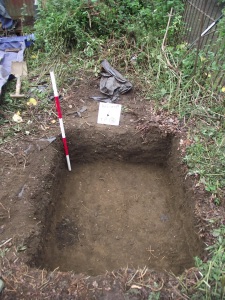 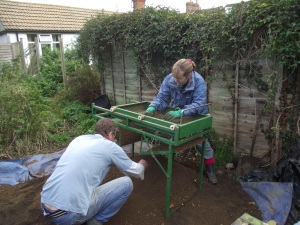 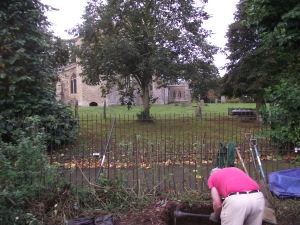 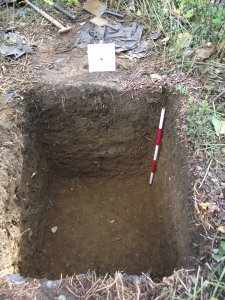