The oldest part of the church is 10th century, but it may have older origins. The Saxon and Norman village would of originated close to the church so the possibility of finding Saxon and Medieval finds was quite high. An excavation  just southeast of the church in the 1990′s identified a ditch thought to be the 11th century church boundary. This test pit was excavated to see where this boundary ditch runs.

A modern topsoil containing modern pottery, glass, brick and animal bone  overlay an earlier topsoil deposit containing clay pipe stems, tiles and Victorian pottery. Sadly the test pit was located over the top of a modern pit filled with builders rubble and only a small portion of the test pit was unaffected. The area unaffected by the modern pit contained a subsoil below the topsoil layers, which suggests the test pit is located outside of the boundary of the cemetery. Sadly we didn’t find any medieval pottery but the test pit does prove that the boundary ditch we were searching for was located closer to the church.

A huge thank you to all our volunteers, Pauline from LBDAHS and of course Steve and Sally for allowing us to dig a hole in their garden. 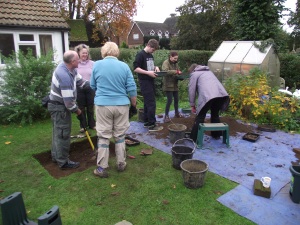